Iran, also known as Persia, officially the Islamic Republic of Iran, is located in Western Asia. With about 80 million inhabitants, Iran is the world's 18th-mostpopulous country. Iran is bounded on the north by Armenia, Azerbaijan, Turkmenistan, and the Caspian Sea, on the east by Afghanistan and Pakistan, on the south by the Gulf of Oman and the Persian Gulf, on the west by Iraq, and on the northwest by Turkey. Iran's capital city, Tehran, is located in the north of the country.

Climate of Iran is characterized by cold winters and hot summers prevalent across the plateau. In Tehran, where RIWE is located, fall and spring seasons are mild. The annual rainfall does not exceed 30 cm (12 in); the deserts and the Persian Gulf shorelines receive less than 13 cm (5 in). Snow falls heavily on the mountain peaks and is the principal source of water for irrigation in spring and early summer. The Caspian shorelines are warm and humid throughout the year, and the annual rainfall in that area is about 100–150 cm (40–60 in).

The majority of the population speak Persian (Farsi), which is also the official language of the country. Azeri Turkish, which is by far the most spoken language in the country after Persian, is spoken in various regions of Iran, especially in the region of Azerbaijan in northwest of Iran. Percentages given by the CIA's World Factbook include 53% Persian, 16% Azerbaijani Turkish, 10% Kurdish, 7% Mazenderani and Gilaki, 7% Lurish, 2% Turkmen, 2% Balochi, 2% Arabic, and 2% the remainder Armenian, Georgian, NeoAramaic, and Circassian.

Persian language is different from Arabic language, however the hand writing is somehow similar with some exception. You might struggle a little bit at the beginning with pronunciation of the written Persian, which are unusual in other languages except Arabic, but if you show will to learn a little bit of Persian, any local will be eager to help you. When it comes to English, usually younger people speak and understand English. Some common Persian phrases are as follows:

Esme shomaa chie? || What is your name?

Twelver Shia Islam is the official state religion, to which about 90% to 95% of the population adhere. About 4% to 8% of the population are Sunni Muslims, mainly Kurds living in the west of the country and Baloches in the southeast. The remaining 2% are non-Muslim religious minorities, including Christians, Jews, Bahais, Mandeans, Yezidis, Yarsanis, and Zoroastrians. Around 250,000 to 370,000 Christians reside in Iran, and Christianity is the country's largest recognized minority religion.

Local time in all provinces in Iran is GMT/UTC +3:30 hours. We switch to “Summer time” every 21st of March by adding 1 hour and to “Winter time” every 22nd of September by subtracting 1 hour.

We use Iranian Calendar, one of the longest chronological records in human history, which is a solar calendar. Saturday is the first day of week and Friday is the only weekend day. Many governmental and private agencies are also closed on Thursdays.

The official currency is Iranian Rial (IRR). Although “Tooman” which has not been an official currency of the country for a long time, Iranians commonly express amounts of money and prices of goods in "Toomans". One "Tooman" equals 10 IRR. Prices of goods are usually written in IRR however in some shops you may find the price tags in “Tooman”. You might come across coins of 2000 or 5000 IRRs and banknotes of 500, 1000, 2000, 5000, 10000, 20000, 50000, 100000 and 500000 IRRs. you can exchange foreign currencies into Iranian Rials at any exchange office ( Persian word is: Sarrafie) in the city. Please note that foreign credit cards are not accepted in the Iran and payments can be made only in cash or using local credit and debit cards, which can be obtained from every bank in the country.

There are a number of historical palaces in Tehran, which are among the most visited tourist attractions of the city. Golestan Palace, Sa'dabad Palace and Niavaran Palace are some examples of them. Moreover, Tehran museums are counted as one of the main tourist destinations each year. These museums, such as Carpet Museum of Iran, Glassware and Ceramic Museum of Iran and National Jewelry Museum, are the attractive manifestations of Iranian culture and art.

Public transport in Tehran is always crowded in rush hours. Frequency of them depends on time of the day and line. Waiting time ranges from 3 to 10 minutes. The metro entrance is indicated with this sign 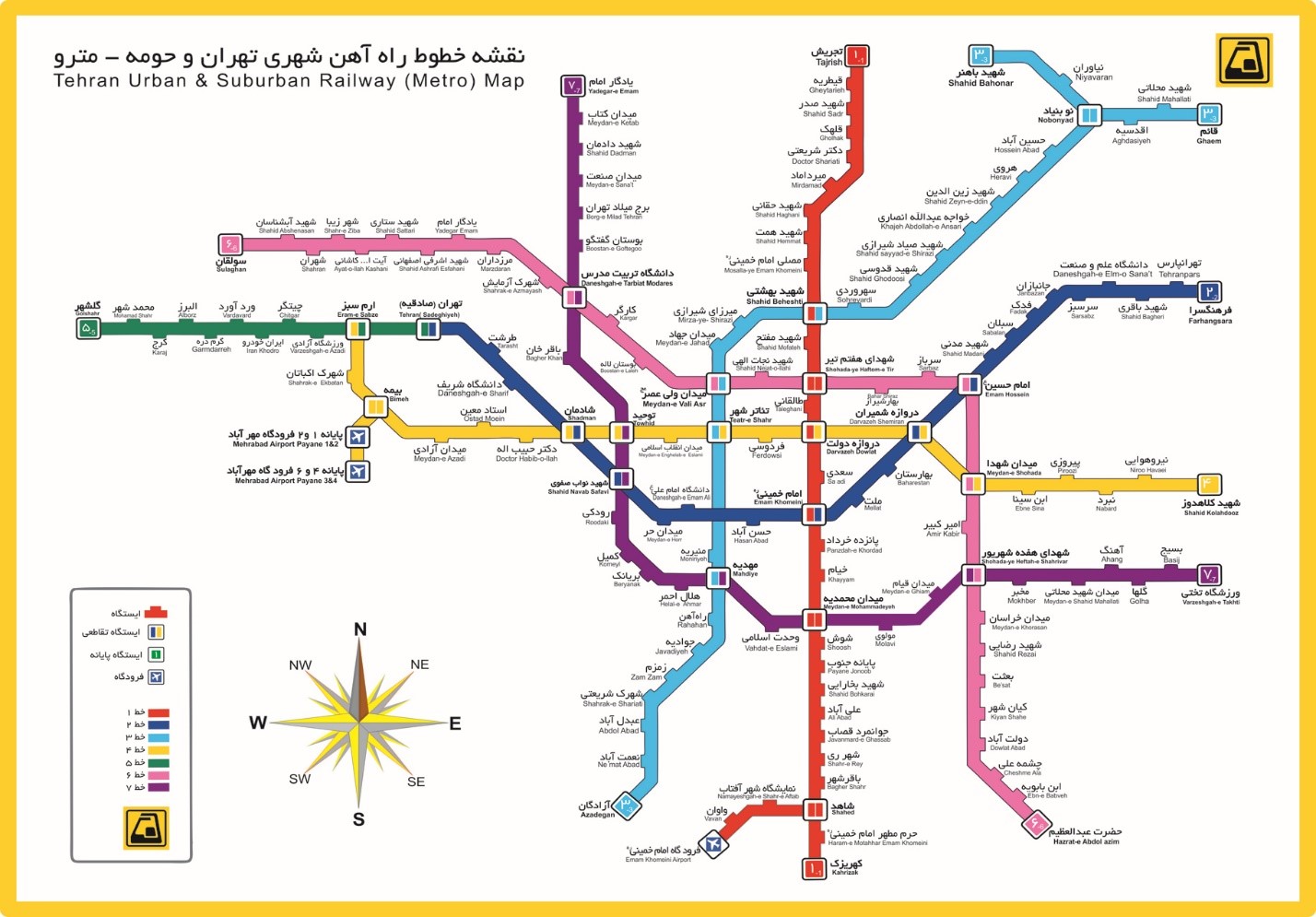 There are more than 40 airlines, which have direct flights to Tehran. Regardless of which one you choose, you land at Imam Khomeini International Airport in Tehran (IKA), which is located south of Tehran. From IKA It will take approximately 40 minutes to Tehran. If you need to take a taxi, please follow this instruction:

1. Change at least 25$ at the exchange office at the airport.

2. There are several Taxi reception counter in the main hall of the airport, catch a taxi from one of them. You should check the total amount at the reception before catching a taxi. Then you will ask to pay a little to the reception, which is included in the total fare. The remaining will be paid directly to the driver after you arrived to your destination.

Whole Tehran is covered with mobile networks of various mobile operators. Credit for pre-paid cards can be bought at any newspaper stand or grocery store in the city.

The people of Iran are warm, friendly, hospitable and very formal. When interacting with people in Iran it is a good idea to have some understanding of gestures, expressions and socially acceptable behavior. Persians are very hospitable people and accord love, respect and warmth to every guest visiting their household. You may be overwhelmed with the warmth, affection and the amount of food and drink that you will be showered with when invited to a Persian home. The honor and respect extended to a guest is reflected in seating arrangements and service of food and drink. Physical contact in greeting people is commonly observed and Iranians can be quite physically intimate with same-sex friends, even in public. A hug and three kisses are a standard greeting for family members. Physical contact with non-family members of the opposite sex, unless they are very young children is forbidden.